For more information please reach out to info@premierbasketballtournaments.com

Please check back for hotel information.

Please check back for schedule information.

Each team shall consist of 4 players per team (3 players on the court and 1 substitute.)

No coaching from  the sideline allowed

There will be one official per court and or one court monitor per court.

4 – Beginning of the Game

4-3 – The game cannot begin if one of the teams is not on the playing court with 3 players ready to play.

5-3 – Every successful free throw is worth 1 point.

6 – Playing Time/Winner of the Game

6-1 – The regular playing time shall be 1 period of 15 minutes/Running clock.

6-3 – In chase of a tie game, each player will choose a player to shoot a free throw.  The first team to score a free throw and the other team misses a free throw is declared the winner.  The free throws must rotate between players until one is made and one is missed.

7-1 – A team is in  a penalty situation after they have committed the 6th foul.  No limit on individual fouls.

7-2 – On the 7th team foul a team is awarded 1 point for every foul over 7 team fouls.  On the 11th team foul the opposing team will be awarded 2 points and the ball.

8-1 – Following every successful field goal or defensive rebound, whether the ball touches the rim or not, every new possession must be returned behind the arc line before a team can attempt to score.

8-2 – If an offensive player rebounds then he/she can continue to try to score.  Any and all defensive possessions must return the ball behind the arc line.

8-3 – Jump balls will rotate possession.  The 12 second shot clock will reset on all jump balls

9-1 – Stalling or failing to play actively, not attempting to score, shall be a violation.

9-2 – There will be a 12 second shot clock.  The clock will reset after every possession

SHOT CLOCK NOT USED IN ALL PREMIER 3X3

9-3 – An offensive player, after the ball has been cleared, shall not hold the ball or dribble inside the arc with his back turned for more than 5 seconds.

Each team is allowed one 30 second time-out.  You can only call a time-out on a dead ball or if you are the team in possession of the ball.

All teams must report to the courts 15 minutes before all games begin.  The schedule for each team will be posted at the courts before each night that you play.  The teams that play after each game must provide a scorekeeper to keep the score, fouls and operate the shot clock.  This is a mandatory rule to play in the league. 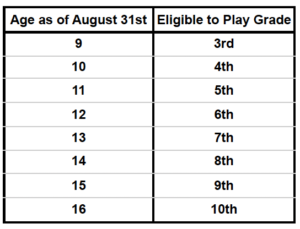